In the middle of April 2020, the “Talk Session Series” consisting of three sessions was held as a related program of the masayume project. In this series, with the aim of exploring masayume that started in the spring of 2019 from various perspectives, guests with different specialties spoke with the members of the contemporary art team 目 [mé] under the three themes of “city and people,” “seeing,” and “landscape of Tokyo.”

While the event was initially planned to take place at HOBO Nichiyobi, an event space that newly opened in Shibuya PARCO in fall 2019, the event urgently changed its plan as an online distribution in order to prevent the spread of the new coronavirus infection. Although disputes were held in the masayume office whether or not the themes should stay as its original plans under the circumstance of the State of Emergency, we reached our conclusion with the guests that there are roles of cultural art and expressions in society at such times and decided to actualize the event with its original themes.

What is masayume, and what is happening now? The first session opened up with such a question in which Minamigawa, the Director of 目 [mé], had asked hoping to think of its answers from the perspective unlimited to medicine and politics. SHIMUTA Nobuko, who had been involved in various regional projects from an editorial point of view, was invited as the guest speaker for the theme “The Connection Between the City and People.” The fact that we embrace our affection to the city through experiences, and how the nature of a city is dependent on the independence of the people, and the possibility and expectation that masayume may change the way we see the world through layering a new story on a city were shared through the dialogue.

For the second session, we welcomed ITO Asa, who conducts cross-sectional researches centered on aesthetics with the theme of “seeing.” While referring to the way blind people perceive things, the conversation also stepped into the philosophical realm, as to how a sighted person cannot see the details of huge things such as a landscape because one has a “viewpoint.” Seeing a face floating in masayume may at the same time mean to be seen from the face. The curiosity of facing the “uncertainty” that comes from acquiring the reversible viewpoint of seeing/seen was presented in the conversations. Masui, the Installer of 目 [mé], also commented on seeing things in the eyes of others from the perspective he had through his experience and practices of being in charge of the production of the works in the team.

For the third session, “The Scenery of Tokyo” was reconsidered with ISHIKAWA Naoki , a photographer who travels from cities to frontiers. Various perspectives were presented on the ever-changing Tokyo, such as the colorless and transparent comfort where prominent personalities blend into the crowd, and the momentary city where people share their current lives. Ishikawa showed sympathy for the remarks made by Kojin (Artist, 目 [mé]) in how her eyes and perspectives had changed after the outbreak of the coronavirus, and how she perceives the appearances of landscapes. The session was fulfilled with inspirations and discoveries unique to each artist who had been moving from places to places and had been working on expressions of landscapes.

The project masayume was inspired by the dream Kojin had when she was in junior high school. One of the important elements of this project lays in the process of a small and private memory of one person seeking universality and being shared among many people. As the dialogue accumulated its words throughout the three sessions, there were many moments that touched fundamental questions about the situation we are currently facing and the world itself, which we hope had been inspirational for everyone.

We received many comments from viewers including questions to the speakers, how they look forward to the floating of the face, and that they could watch the talk session, even living far away from the venue, because it was held online. Along with the intention by the 目 [mé] members of making the project “a crucial incident for all humanity,” we further continue to develop the project so that masayume can reach even more people.

The detailed content of each session is archived on the website Hobo Nikkan Itoi Shinbun [Almost-Daily Itoi Newspaper]. Although the article is only in Japanese, there are many photographs and sketches of the works by 目 [mé] and images provided by the guests. We hope you can take a look at the report where you can feel how the talk sessions took place. 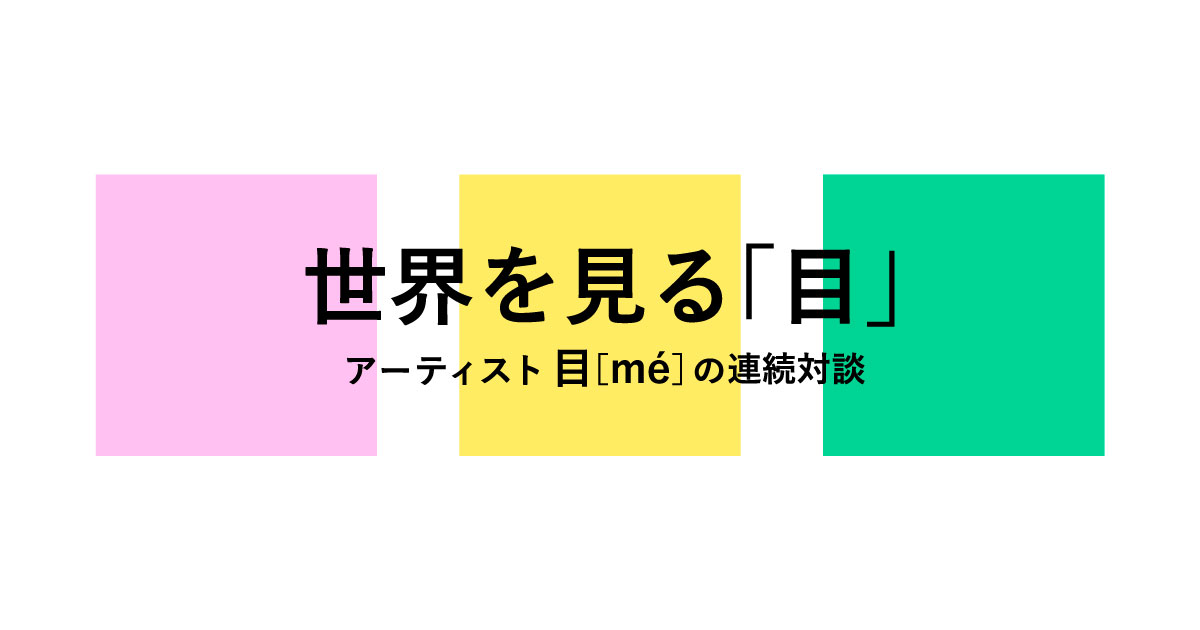 We would like to once again express our appreciation to all guests who participated in the sessions despite the difficult circumstances, the members of Hobonichi Co., Ltd. who cooperated with the series, and to everyone who supported us in the event.

Although the “Face Floating” scheduled for this summer has been postponed, please look forward to imagining the scenery of the face floating in the Tokyo sky.

For detailed schedule and application of the programs, we will make announcements on our website and in our newsletters. For latest information, please sign up to our newsletter.